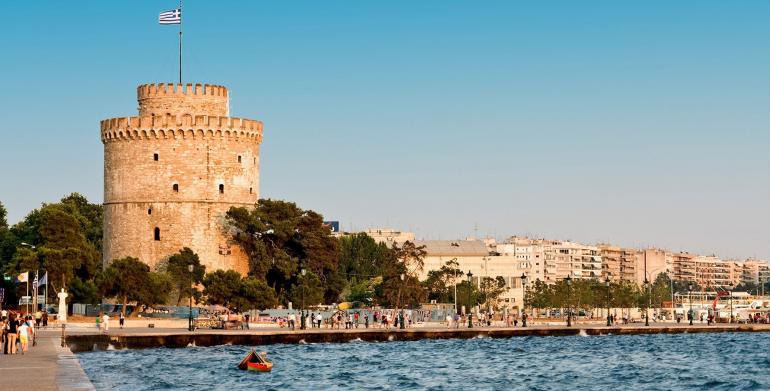 Thessaloniki or Thessaloniki is the second largest city in Greece after Athens and an important cultural and administrative center. Its founder, King Cassander, named it after his wife and sister of Alexander the Great - Thessalonica.

The city became the capital of one of the four Roman provinces in Macedonia. Here the Apostle Paul preached, setting the beginning of the Christian church in the Balkans in Europe.

During the Middle Ages the city was one of the largest trade centers in Byzantium. The holy brothers Cyril and Methodius were born in Thessaloniki. Later the city was part of the Epirus despotate, which in 1235 became a vassal of Bulgaria under Tsar Ivan Assen II. The next part of the history of the city is connected with the Nicene Empire and the invasion of the Ottoman Turks. With the Ottoman invasion, Emperor Manuel II Palaeologus handed him over to Venice, as he could not defend it. In 1430, Sultan Murad II captured it after an eight-year siege.

The city is dotted with early Christian and Byzantine monuments included in the UNESCO World Heritage List. Here are some of them.

• The Church of St. Demetrius

Other local landmarks are the White Tower, the Gallery Arch, St. Sophia and Aristotle Squares, Alexander the Great Boulevard.

• Cultural Information Center in Thessaloniki - located on Aristotle Square, near the White Tower.

Which sights to visit by car rental near Thessaloniki
• Vergina and the tomb of Philip II of Macedon (70.3 km or 59 minutes by car rental)

Vergina is a village located on the right bank of the river Bistritsa (now Aliakmonas). It is located 70.3 km from Thessaloniki. Here archaeologists have discovered the first capital of ancient Macedonia - Ege. A necropolis later believed to have belonged to Philip II was later discovered. At the same place was found the Star of Vergina - an ancient Macedonian symbol sun with 16 rays, Vergina golden oak wreath and golden myrtle wreath.

Philip II of Macedon was an ancient ruler of Macedonia and the father of Alexander the Great. It is named after the largest city in Thrace - Philippopolis (now Plovdiv).

Dion is a city in Aegean Macedonia, located 90.2 km from Thessaloniki, at the northern foot of Mount Olympus. The name "Dion" is a local version of "Zeus" - the main Olympic god. Archaeological finds here include a Macedonian tomb from the 4th century BC, an early Christian basilica and a statue of Hera built into the city walls.

The Tempe Valley is a narrow but long canyon above the Penei River, which faces the Aegean Sea. The ten-kilometer gorge is located between the Mount Olympus, to the north, and Osa, to the south. It is surrounded by remarkable overhanging rocks, whose height reaches 500 m. The distance from Thessaloniki is 136 km from Thessaloniki, and the road follows the coast. Today, in the area shrouded in mythology and legends, the chapel of Agia Paraskeva was built, near a cave with a spring. According to a legend, Apollo persecuted Eurydice here.

If you have time, be sure to visit the unique complex of monasteries built on high megalithic rocks, rising 400 meters above the Thessalian plain. The monastery complex originated in the 10th century and has been functioning since then without interrupting the monastic tradition. It includes nine monasteries, of which six are active. At its foot are the picturesque villages of Kalambaka and Kastraki, dotted with interesting souvenir shops. The natural phenomenon Meteora, part of the UNESCO World Heritage Site, is located 229 km from Thessaloniki. Stroll along the Olympic Riviera and relax in a beautiful spot along the 70-kilometer beach at the foot of Mount Olympus. With your rental car from Universal Car Rent, you can go wherever and whenever you want - safe, comfortable and enjoyable.